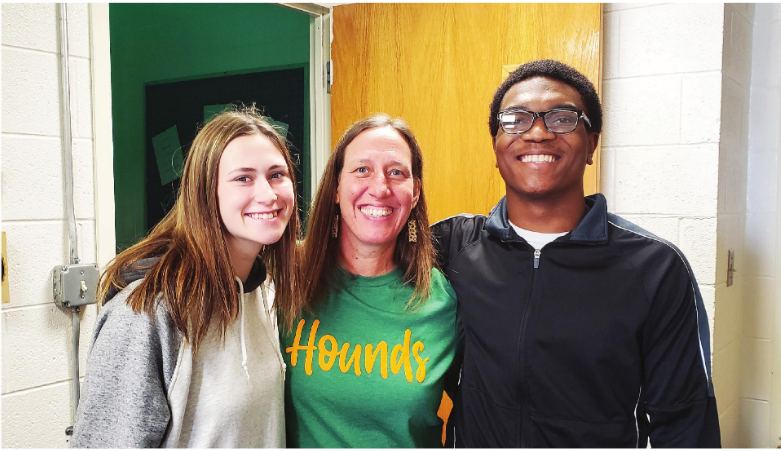 The following article can be found in the Maryville Forum:

"With the help from rootEd Missouri and the Missouri Department of Elementary and Secondary Education, three Nodaway county high schools received funding this year to focus on seniors and their afterschool plans.

Maryville R-II, Northeast Nodaway R-V and Nodaway-Holt R-VII applied for funds and were awarded grants to put toward an effort to ensure 100 percent of graduates leave high school with a plan, whether it be college, the workforce or the military.

The funds provided a new position, a rootEd Advisor at each local school district.  Becky Houtchens at the Maryville High School said she's excited to take on the role.

"It was a lot of stuff that I was already doing in my counseling job, but the opportunity for that to be the sole focus I love because it's really my favorite part of what I was doing there," she said, noting that this also frees up the other two counselors to focus on the mental health and well-being of all students in the school.

After a week of training for the program this summer, Houtchens said advisers left with a goal of having all seniors have one of the "Three E's:" Enrolled, Enlisted or Employed.

"It's every path that they might take that I want to be here to help them with whatever it is they want to do," she said.  "College is not for everyone."

Houtchens said it had always been a dream that each of the seniors had a plan after high school in years past that the district has come close, reaching as high as 80 percent on year.  But now with this position her goal is 100 percent.

Because she's able to directly focus on this goal, Houtchens is teaching an elective class for seniors this year called College 101.

Creating resumes, researching schools and applying for scholarships are just some of the many topics tackled in the class.  Houtchens is also focusing on the day-to-day life of a college student and some of those survival skills, like how to find help if you're struggling in a class, or how to get involved, and just what a typical day looks like for a student.

She has 19 students enrolled in the course, on of whom spoke with The Forum during his second week of classes.  Adrian McGee is interested in a school outside of Missouri, and is working with Houtchens to research the best quality school in his preferred field of study -- occupational therapy or accounting -- that is also affordable.

"I think it's a wonderful class," he said.  "She's done things to help us get to the start of our college search and hopefully plan on what we want to do in the future.   ...I couldn't think of a more beneficial class."

McGee said his favorite part so far has been the book they're reading about tips for college.

"That has been very educational as far as what to expect from a social aspect of college to help those who, I would say, are not as social," he said.

Listing several colleges, all out of state, McGee said he's looking forward to finding a new experience and is looking for the right fit.  He said Houtchens is helping him not only to find the right school, but funding opportunities as well.

"When we get deep into scholarship season, you know, for a kid like this who is working two jobs -- like he is so busy outside of school -- to have this supported time in the school day, I think, is really going to help him," Houtchens said.

On the other side of the adviser position, Houtchens will be visiting with each student one-on-one with a goal of finding their first steps after school.

"There's (the class) part of it, and then really the meat of the program is the one-on-one meetings with me and seniors," she said.

While in the past counselors would meet once with seniors one-on-one early in the year, Houtchens is planning to quadruple that and meet with each student once per quarter.

"Early in the year, I hope to identify the students who are going to need more support in figuring out their plan and getting there," she said, recognizing that many students have support at home, but many do not.  "I'm really looking for the ones that need more support for whatever their plan might be."

Houtchens' favorite aspect of the new position is being able to dive deeper with students while developing stronger relationships with them, she said.

"I think of her as my best friend," senior Mariah Wiederholt said last week.  "She has helped me through a lot.  ... I went through a lot of rough stuff last year and she was by my side.  She helped me make sure my classes were getting done, make sure I was still on top of everything, and most importantly made sure my mental health was important and ahead of everything."

Wiederholt said she's right now just focused on graduating, but that she hopes to get into cosmetology school because she really enjoys doing hair and makeup -- not nails so much, but she's working on them.

"(Houtchens') words like to stick with me," she said.  "when we have conversations, certain things she'll say to me, just kind of like a mother, the things she says just stick with me and I use them at work, or at school, or in my personal relationships with other people."

If she weren't available, Wiederholt said she'd "probably be freaking out."  While the other counselors are helpful, since day on of starting high school, "she's always been by my side.  I honestly couldn't do it without her."  Houtchens said since Wiederholt has not decided about what to do after school, they're going to explore a lot of options, including cosmetology, or working and saving.

"I've always told the kids that yes, I'm here while they're in school, but 'Once a Spoofhound, Always a Spoofhound,'" she said.  "Even after they graduate, I want them always to know that I'm a resource here for them at whatever age and stage they're at."

While the rootEd grant is for two years, Houtchens said she is planning to prove the program's value in hopes that the district will continue it after the initial two-year period."